Christians confess without batting an eyelid these words from the prologue to John’s gospel: ‘and the Word become flesh and pitched his tent among us’ (Jn 1:14). But down the centuries, and even today, we have been far less quick to note that if the Word became flesh, then we humans are beings of flesh and blood. For many believers we are just souls ‘inhabiting’ bodies and we do not take our bodies seriously. But if we do – and taking our physical nature seriously is at the core of both of our faith that Jesus is the Word made flesh and of the sacraments – then space matters.

We are beings who exist in a place, relate to others in place and space, and our relative location is something that is primary in our experience. We might hear a disembodied voice on the radio or in a lift or out of a satnav, but we know that to be real human being means being an object in space. So from our first moments we are not only relating to others, but relating to others in space, and relating to the space around us. This basic of our humanity is usually only discussed by philosophers, but it is rarely far from our consciousness. In London recently I was about to get on the Tube at rush hour: I could see the space available, recognised I would not fit into it and decided in a flash that I would have to wait for the next train. Earlier, I had seen a sale notice in a shoe shop, and space – as shoe size – was all important: yes, they had my size, but that size was not in the sale! We also know that space can send signals: we know that negotiations between equals – ‘round table talks’ - have to take place around a table because we know that there are can be distinct places that speak of ‘leaders’ and ‘led.’ Political analysts study photographs of leaders and cabinets to find out who is ‘in’ and ‘out’ – relations in place reflect human relations. And we have only to look to legislatures and courtrooms to see how the most complex of relationships are given expression in space. There is ‘the government benches,’ the opposition are located opposite, the backbenches are there and there, and there is the division lobbies where going into one space or another is decisive, meanwhile the judge is on the bench, the jury have another special location, there is witness box, the dock, and the public gallery. Spaces denotes roles and relationships. Spaces can speak of privileges, authority, power. Space separates the doers, the actors, from the audience, the ‘in group’ from those pushed out to the margins at the edge of the significant space so that they are at risk of having no place at all.

We experience space. Space speaks to us before we think, it establishing the framework of our perception and our conscious engagement.

This is why space matters in liturgy. This insight is often denies by those who question the need to have suitable liturgical spaces are just one more ‘trendy’ notion thought up by modern theologians. In answer to such criticisms, rather than point out the dangers of a gnostic approach to faith which denies or minimises the physical, it is enough to note that these a few examples of taking space seriously. We know from James (2:1-6) that the places in the early gatherings for the eucharistic meal were matters of dispute in the first churches: people contended for the places of honour. This sense of space and location is then the background for the parable of Jesus in Lk 14:7-11. People just know that there are ‘places of honour’ and the advice is not to take one from which you will be ejected ‘and then you will begin with shame to take the lowest place’ but to take the lowest place and ‘then you will be honoured in the presence of all who sit at table with you.’ Likewise, the Zacchaeus story turns on him being right out on the margins to start with, and then being invited to be at the centre of the table (Lk 19:2-10).

So can we alert ourselves more to our liturgical spaces and what they ‘say’ to us from the moment we enter them?

The liturgy before Vatican II stressed separation: between the nave and the sanctuary, between the people and the priest, between the everyday and the sacred, and between celebrating – the work of the celebrant – and the attending / hearing. This division was always marked by altar rails, usually by distance between the praedella (immediately in front of ‘the altar’) and the pews, sometimes by a screen, sometimes by a canopy (a baldachino), and invariably by height. These dividers in space dovetailed with other barriers that sent out the message of difference such as Latin, virtual silence, and vestments. So transforming buildings built upon the very idea of dividing space to become spaces that expressed inclusion, belonging, and the sharing of the celebration by all concerns – so that communities could be ‘wholly celebrant’ -  was always going to be far more difficult than it seemed to most parish priests in the 1970s. They thought they just ‘had to pull the altar out so that I can face the people’; and the result was a new liturgy which spoke of being gathered around the table of the Lord while our bodies experienced a space that communicated the exact opposite.

However, some accommodations were better than others, and here is a very good one. 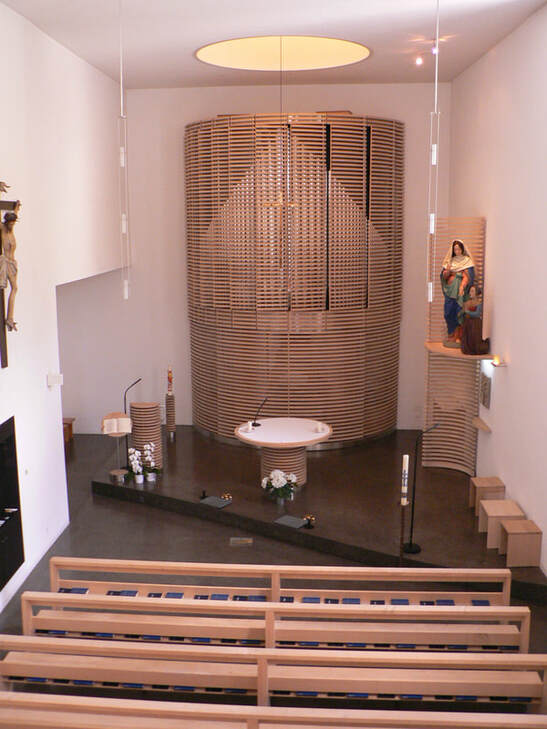 The building dates from the 15th century, but the interior is, some statues and wall paintings apart, from the 1980s
A typically small very dark parish church that was based on the pattern of a chantry chapel with a sanctuary that took up over a third of the area has been transformed in a light and airy unified space. This is clearly a space where all can see and hear, there is a distinct emphasis on hearing the word alongside the table, and there has been a deliberate attempt to minimise barriers between the presider and the rest of the group. His chair is close to the pews and there is a microphone stand but no lectern getting in the way. Distractions from the activity of the gathering have been kept to a minimum.  While the place of reservation is visible to all (on right wall), it is not a focus of attention while the Eucharist is being celebrated.

But look again. The space of the presider and the servers is a place of movement, that of the gathering is very fixed and limited by pews. This is in form an auditorium: a place where there are doers and listeners / observers. The special space is marked off from that of the ordinary space. There is an invisible wall marking off the space with the table, ambo, and ministers’ seats from that of everyone else. This wall is akin to the ‘fourth wall’ between the audience and the stage in a traditional theatre. 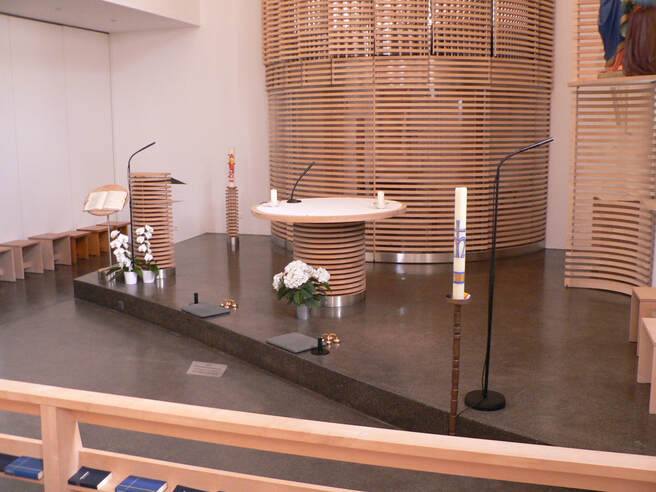 The ‘sanctuary’ is still there: marked off by a step – it is to be seen from those who do not come near it. It is a table to be knelt before – note the hassocks – and it is an action that is done for those present rather than by those present: this is indicated by the continued use of bells.
Mixed messages

Here is another adaptation and one which visually invokes the notion of being gathered at the table. Disciples, many of them, are coming towards the table and the Lord is offering them food at his table. But look at the actual table of the gathering. It is raised up to a level apart: it is to be seen as an object at which others – the clergy – act. One cannot see what is on the table (one looks down at table as the artist who pained the backdrop understood) but that is not important because one is there for that the priest does at the table and then one receives the results. It simply is not our table (as the gathering) but their table where something is done that affects us. If we have any doubt about this division we have just to note the difference between the space around the chairs behind the table and the seating in front of it. 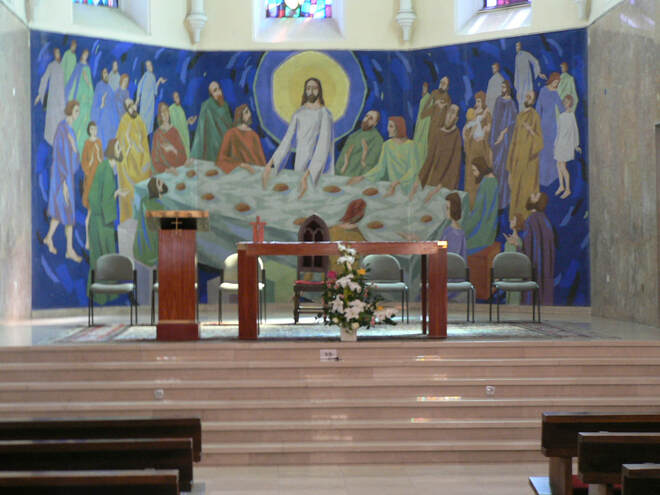 The sanctuary of a late 19th century building has been up-dated in style, but the theology of space had remained the same.
There is no more effective way of conveying the notion of inequality in status than with steps. Just think of the word ‘graduation’ and ‘grading’ (from gradus: s step), note how speak of ‘upper crust’ and ‘lowly’), and recall that the old rubricians had to say that a praedella could never be more than five steps higher than the sanctuary – just as we see here.

But look again at the backdrop. The picture says ‘all are welcome to the table’ but the actual table says ‘clerics only can stand here.’ This is a case of mixed messages – so which do you trust: the explicit that you are told or the implicit you feel? Most just end up with a sense of it all being confused – and that confused is never the important.

Look now for a third time at the backdrop: what do you see?  A table and Jesus, a clearly there are men (note beards) nearest him. Now look at that the others. Almost all are men. Only two are probably women – they are not obviously women in the way that the others are men – and both are looking after children. This is a very clear statement about the nature of the church and its view of gender, but note the dissonance between the image depicted and the reality of the gathering. Such dissonance means that a painting designed to explain what is happening actually shows up difference.

This restructuring for all its elegance and clean lines must be judged a failure. It not only has not grasped the message of Vatican II, but still transmits the very ideas the new liturgy sought to counter and it does it unobtrusively and silently by its use of space. Its problems are all the more serious for that.

The pre-1970 liturgy generated spaces that were best seen when the building was empty – the building was like a stage set and was to edify a congregation which had to spend much time just there in silence. The décor was a pious distraction and its external beauty was intended to generate the thought that the actual liturgy could not. Here is a wonderful example. 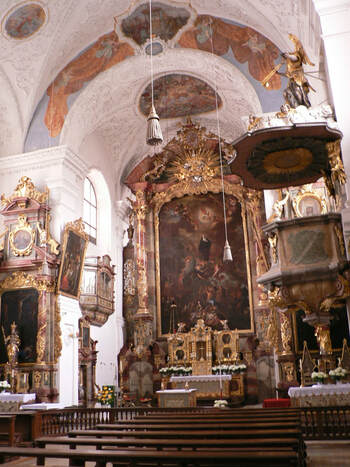 A feast for the eyes lest the mind wanders elsewhere while the clergy engaged with their words and actions: ‘the liturgy’.
A successful modern building is best seen when it is full of people actually engaged in the liturgy as here.

The building is not much to look at, but its function and the focus of the gathering stands our clearly.
​So one question to ask any liturgical space is this: is this place better seen with or without people?

Then the second question: is this space for all to be active, ‘wholly celebrant,’ or is it for a core group with a supporting group in attendance?

​Asking these questions often suggests just how shallow has been our renewal of our worship.